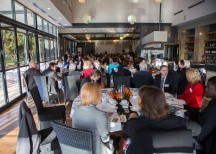 The escalating population growth of the Peel Region dictates a need for investments in social and commercial infrastructure.

Peel Development Commission Board Chairman, Geoffrey Totterdell said the Peel Investment Series event held on Friday, July 18, highlighted the need for investment that will provide essential services and job opportunities to maintain a healthy and prosperous society into the future.

“But he also foreshadowed the infrastructure requirements associated with increasing demands related to WA’s burgeoning population over the coming decades.”

He told the audience that while in the past the Peel had not received significant Royalties for Regions funding as compared to other regions, he was now lobbying very hard to ensure the Peel receives funding for much needed infrastructure and services.

Dr Hames said the Peel region is well placed to benefit from a $600 million (over five years) Royalties for Regions “Growing our South Initiative” announced in the 2014/15 State budget.

This initiative will help implement major infrastructure and community projects in the southern regions of the State, he said.

Each of the nine regions in WA will also have access to a $292 million fund (over five years) to develop major economic, social and community development projects through their Regional Investment Blueprints.

After delivering an interesting presentation on the progress of Perth Airport’s $1 billion redevelopment, Mr Geatches outlined the processes that had been required in establishing the Airport’s property business, and related these to Peel’s vision of establishing a business park in the region.

He said careful urban planning was required along with getting the role of private enterprise and Government right, to ensure a workable regulatory framework.

“Understand your competitive advantages and focus on them,” Mr Geatches said.

“Don’t try to be everything- the market will decide”.

Also understand your weaknesses and fix the ones you can.”

In answer to a question from the audience on where and when a second airport would be built in Western Australia, Mr Geatches said that decision was a long way off.

He said he believed the future Peel Industrial Park and the growth of agribusiness and exports, now and into the future, could potentially provide substantial aviation opportunities for the region.

“The Commission would need to do further commercial analysis on this,” he said.

Peel Development Commission Chief Executive Mellisa Teede said she was thrilled with the number and composition of the event’s audience.

“The Commission is striving to attract new investment and supporting infrastructure in the region so it can grow and diversify employment opportunities and provide career pathways for local people and drive regional prosperity,” she said.

“The attendance at this event is a great indication of the readiness of business people and prospective investors to hear what we have to say.”

“The breakfast was a very successful event,” he said.

“I think that with such an array of developers and business people in the audience, that there is an acknowledgement that the Peel region will become an excellent region to invest. There is some confidence that the Peel is about to expand and with this some significant investment from the State Government.”