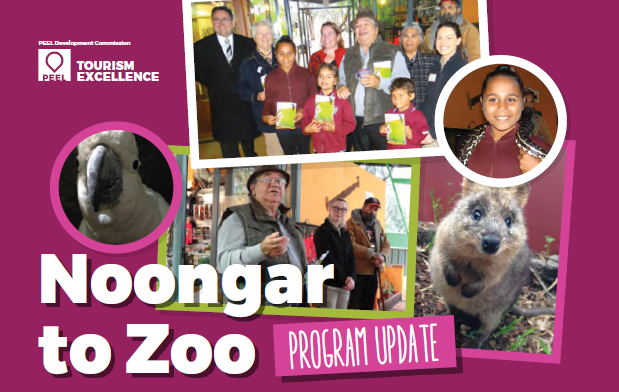 The Peel Zoo Foundation received funding from the Peel Development Commission to produce resource material to support the teaching of Noongar language and culture in a fun, factual, and interactive way.

The product was “Noongar to Zoo; a 32-page booklet, accompanied by a free app and USB audio files. The booklet includes a fact sheet on fourteen native species as well as pictures, learning activities and Noongar language content.

The Noongar content in this material is based on the knowledge of one Noongar Elder, “Uncle” Charlie Kickett, and his recollections about the relationship between the Noongar people and Western Australia’s native animals.

This “Noongar to Zoo” project represents the collaboration of “Uncle” Charlie, his niece, Rita Ward Lusted, and the management and staff of Peel Zoo and the Peel Zoo Foundation.

A major outcome of the project is the capturing of certain aspects of the Noongar language and culture for prosperity. This is vitally important because the Noongar language is classified as an endangered language.[1]  According to the United Nations Educational, Scientific and Cultural Organisation (UNESCO) the extinction of a language “results in the irrecoverable loss of unique cultural knowledge embodied in it for centuries, including historical, spiritual and ecological knowledge that may be essential for the survival of not only its speakers, but also countless others.”[2]

As UNESCO states, “the most important thing that can be done to keep a language from disappearing is to create favourable conditions for its speakers to speak the language and teach it to their children”.[3] What could be more favourable than incorporating Noongar language and culture into the ‘hands on experience’ with native Australian animals provided at Peel Zoo?

The “Noongar to Zoo” program is designed to be used on school excursions to Peel Zoo, in classrooms with a Zoo2U incursion, and as support material for general Noongar language and culture educational programs. While created to aid school teachers in the delivery of specialised classes, “Noongar to Zoo” material is suitable for anyone wanting to learn more about the relationships between Noongar people and native animals. The material is fun, fascinating, and interactive.

This material is now accessible to all educators who book an incursion, excursion, or camp for 2 classes at any time during 2018. Every child attending the incursion, excursion, or camp receives a 32-page “Noongar to Zoo” booklet. In addition, one teacher per class receives a USB thumb drive containing Noongar language audio files of all the animals featured in the booklet. What’s more, teachers receive three bonus stories, as told by Noongar Elder, “Uncle” Charlie Kickett.

Hundreds of students have already received this content from schools stretching from Bunbury to Perth.

Peel Zoo gratefully acknowledges the Government of Western Australia, the Peel Development Commission, and the Peel Zoo Foundation for their support in the development of this project.

This article was written by Bronte Hodgson, Peel Zoo and was first published in the Peel Magazine, Spring/Summer 2018 – vol 4.2 – to read and download the full magazine, click here.